You might be worried because your child was recently held back or kicked out of daycare or preschool. Or maybe you’re just concerned that it might happen, if things continue the way they are. 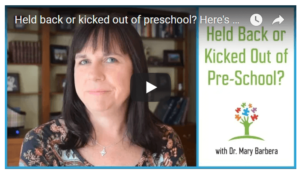 Ready to learn how to take action with your young child or client?
GET YOUR TODDLER ACTION GUIDE NOW!

I know how that feels because, when my son, Lucas was young, he was in a 2-year-old toddler pre-school program and the staff there started saying mid-year that he was no problem in the classroom but that he was not engaging with peers like he should.

And they were worried about him progressing to the 3-year-old pre-school the following year because the ratio of staff to students was going to go up, so there were going to be more kids with less teachers.

So, for Lucas, they recommended, since he was a summer birthday, that we actually hold him back into the pre-school toddler class and remain with the same teacher. They also indicated at that point that they thought that we should get him evaluated because they were concerned about his development.

Lucas did go on to get a diagnosis of autism and that year of him being in the toddler pre-school was a year where I should have taken more action. I was really hesitant to even think about the possibility of autism.

But I do see families struggling with this and it’s not always autism. In fact, most of the time it’s not autism even if a child does not progress to the next classroom or even get kicked out of preschool.

But parents all over the United States and the world are struggling because why are their children not keeping up with their typically developing peers? And more importantly, what can you do about it?

I wrote a short action guide, which you can download right below this video. It’s called, Is It Autism, ADHD, or Typical Toddler Tantrums?:  3 steps you can take today instead of worrying. The 3 steps mentioned in the book in a lot more detail are these:

1) You need to know what the milestones are of typically developing kids of your child’s age. So, if you have a 2-year-old or if you have a 15-month-old or you have a 3-year-old, the best place that I have found is the CDC website, which lists typical development milestones. This is in the area of language and social skills, but also in the area of physical development. So, if you’re worried that your infant is not pulling themselves up when they should or rolling over or standing up, or if you’re worried that your 2-year-old should putting 2 or 3 words together, how should they be interacting with peers, should they still be on parallel play or interacting more? The link to the CDC milestones is within the action guide.

2) Contact your child’s doctor and make a sick visit. Most people don’t think of making sick visits for developmental concerns but this is where I’d start. It’s also really wise to get an early intervention evaluation to get standardized testing done free of charge in the United States, so that you can see standardized testing methods to compare your child’s development with typical development, and see what areas are of concern and how far they are delayed.

3) Learn more about Applied Behavior Analysis or ABA therapy, because that is and remains the most proven therapy for children with autism and related disorders. So don’t let people tell you that, “Oh, it’s just a mild case of autism. They don’t need ABA.” Or, “They’re too high functioning for ABA.” Or that your child just has ADHD, they wouldn’t benefit from ABA, because the fact is that every child would benefit from ABA therapy and there are techniques that you can learn to do in your home without paying or driving your child anywhere.

So, hopefully, you have found this short video blog helpful and I would encourage anyone interested in more information to click the link right below for my free toddler guide. Thanks a lot and I’ll see you next week on the video blog.

Ready to learn how to take action with your young child or client?
GET YOUR TODDLER ACTION GUIDE NOW!